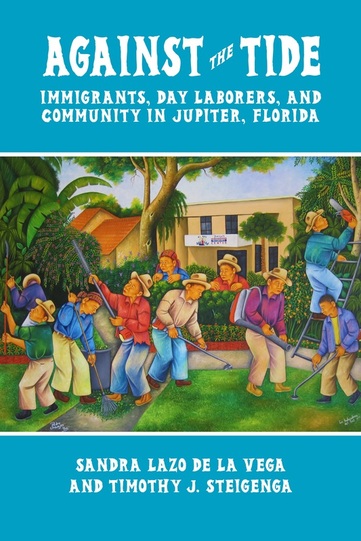 "Los Trabajadores de El Sol" Painting by Pedro Chavajay.
Across the United States, the issue of immigration has generated rancorous debate and divided communities. Many states and municipalities have passed restrictive legislation specifically designed to create a hostile climate for immigrants. Against the Tide tells the story of Jupiter, Florida, a coastal town of approximately 50,000 that has taken a different path. In the early 2000s, Jupiter was deeply involved in immigration debates. In the preceding years, this small town had experienced an influx of migrants from Mexico and Guatemala. Immigrants seeking work gathered daily on one of the city’s main streets, creating an open-air labor market that generated complaints and health and human safety concerns. What began as a local issue rapidly escalated as Jupiter’s situation was thrust into the media spotlight and attracted the attention of state and national anti-immigrant groups.  But then something unexpected happened: immigrants, neighborhood residents, university faculty and students, and town representatives joined together to mediate community tensions and successfully moved the informal labor market to the new El Sol Neighborhood Resource Center. The book tells their stories providing an insider's view into how the events unfolded.  The central argument of Against the Tide is that Centers like El Sol can address many of the fundamental fears that polarize and stymie both local policy debates and the larger issue of immigration reform.

All author royalties from the sales of this book are donated to El Sol and to Corn Maya Inc.

Editorial Reviews for Against the Tide

“Civic leaders and scholars interested in the overlapping issues of economic development, immigrant integration, and public planning will find in Against the Tide a treasure trove of insights and case studies.”
—Paul Ortiz, University of Florida

"The authors convey the importance of recognizing immigrants as human beings and ‘citizens’ of the local society, even if not legal residents or citizens. Against the Tide could play an important and critical role in the ongoing policy struggles over immigrants."
—Alex Stepick, co-editor of Churches and Charity in the Immigrant City